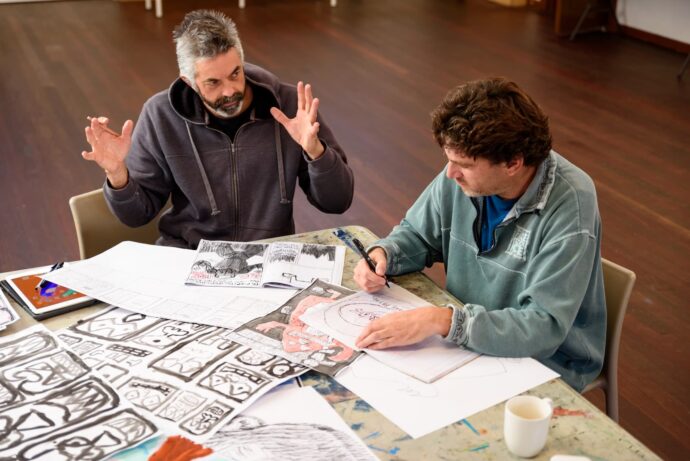 Control, Shift, Return is DADAA’s inaugural writing initiative, bringing together artists with disability in a series of group workshops which will culminate in an annual print publication. Hosted at DADAA Fremantle, workshops run every weekly and participants are encouraged to develop a short, written piece for inclusion in the first issue of Control, Shift, Return. The pilot issue, themed ‘Blank Page’, will reflect the workshops, with a focus on experimenting with forms of writing, nurturing diverse styles, and encouraging meaningful relationships between artists to support their ongoing engagement with the arts and writing sector.

The workshops, led by writer and arts worker Raf Gonzalez, with support from Rashida Murphy, are intended to build skills over time, and include group discussion, individual and collaborative writing provocations, exercises and challenges, and take-home tasks. Selected outcomes from these workshops will be shared on a dedicated Control, Shift, Return webpage on an ongoing basis.

Raf Gonzalez
Raf is a Latino writer and multi-disciplinary artist. Born and raised in Perth, he comes from a family of migrants who moved from El Salvador to Australia during the Salvadoran Civil War. Raf is a proud Aspie whose work highlights often-marginalised diverse identities, raising them from supporting a character to protagonist, and giving them the agency they often aren’t afforded. Raf has written contributions published in Los Angeles Review of Books, Journal, and Centre for Stories’ To Hold the Clouds anthology. He has been supported through writing mentorship by DADAA and Centre for Stories.

Rashida Murphy
Rashida is a writer, poet, reviewer, and blogger. She has published her short fiction and poetry in various international literary journals and anthologies, including the Westerly, Open Road Review and Veils Halos and Shackles. Rashida has a Masters in English Literature and a PhD in Writing from Edith Cowan University. In 2016 she was the joint winner of the Magdalena Prize for feminist research for her thesis which includes the novel The Historian’s Daughter. She has been a judge of literary competitions and awards such as The WA Premier’s Literary Award, The Spilt Ink competition, The Tallus Prize, the Ellen Kemp Memorial Prize and The KSP short story competition; a writer-in-residence at the Katharine Susannah Pritchard Writers Centre WA and the Booranga Writers Centre in NSW; as well as an invited guest and facilitator at the Perth Writers Festival and the Hyderabad Literature Festival.

For information about the program contact mayma@dadaa.org.au or call DADAA Fremantle 9430 6616.