Rafael Gonzalez I The Visual Language of Cheeky Dogs 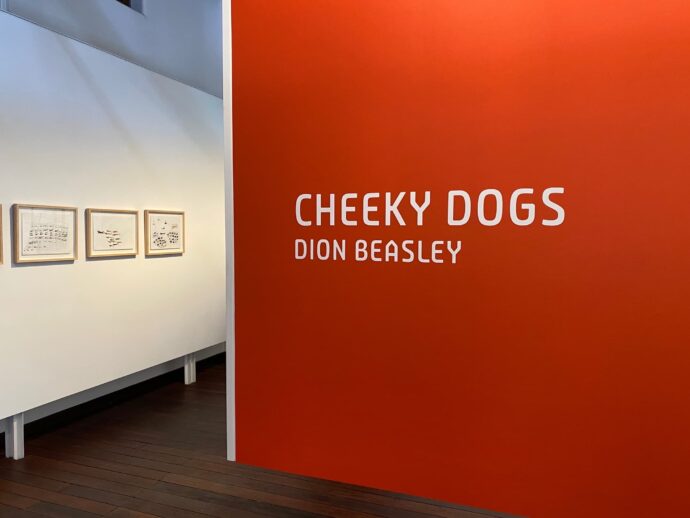 This reflection by Rafael Gonzalez on Dion Beasley’s  Cheeky Dogs, the most recent exhibition at DADAA Fremantle Gallery, is the first in what will be an occasional series of critical writing by writers with a disability. This is part of DADAA’s strategy to provide opportunities for writers with a disability, and to encourage the engagement of these writers with the artistic community, with a particular focus on the important function of critical arts writing and review.

Rafael Gonzalez is a writer whose passion for the arts, coupled with his interests in pop culture, have influenced his imagination to create stories to captivate and inspire others. Raf predominantly writes speculative fictional narratives, although his work has ranged across a number of genres and conventions. Raf is mentored at DADAA Fremantle by Artsworker Mayma Awaida. Raf is also part of the Centre for Story’s Inclusion Matters Mentoring Program. You can read more about him here.

The moment that I walked into the gallery space at DADAA, I was immediately drawn to the bright orange wall in the centre of the venue. A clear tribute to the red earth that always was, and always will be, Aboriginal land, it is even more noticeable to me that this work centralises the experiences of the artist and his hometown of Tennant Creek.

As you take in the delicate drawings and etchings displayed on this wall, there is a recurrent use of negative space and strong linear style that features in each of Dion’s works. The orange was certainly a focal point of the entire room and included some of Dion’s more experimental pieces which I assume may have been grouped together to highlight his pursuit of different mediums and to hint at some of the significant themes to come later.

It felt as though the gallery asked for me to move around it in a clockwise direction. Starting from the left of the orange rotating wall, I determined that the space was curated not just thematically, but also for the purpose of creating an overarching narrative to Dion’s subjects.

The first set of drawings represent notions of gathering and direction. With visible linear shapes representing the iconic Cheeky Dogs, they appear clustered together like a real pack of wild dogs. As an individual who has lived primarily in big cities along the west coast of Australia, I can only speculate that the way in which they are huddled together, is evocative of the wide open spaces that you find in a rural town like Tennant Creek or its neighbour, Canteen Creek. My reading of this is that, for me, gathering and coming together is something which is synonymous with community. This theme in Dion’s work is particularly significant as it embodies the sense of closeness that living in rural towns can encourage.

The second grouping as we move to the right, encapsulates geographical notions of place and identity. In these works, Dion has captured not just the different types of camp dogs that he may have seen, or possibly imagined, but his deep understanding of being part of a community and its politics. There is a strong sense of characterisation amongst each of the dogs – we can easily observe the nature of the dogs, their behaviours and mannerisms, their formation as a group, and also their individual physiological quirks, which make each dog one-of-a-kind. Dion didn’t make any two cheeky dogs the same. I imagine that Dion is using the dogs as a way to understand his relationship to the town and express his understanding of its politics.

A motif I noticed throughout Dion’s work is the allusion to geographical mapping. While I understand that recognising and connecting with a sense of place plays a big role in Aboriginal storytelling and art, I also suspect that the geographical identification of the dog’s hometowns in Cheeky Dogs responds to the way in which those dogs fit into each of those spaces. Dion details whether the dogs are sitting on the outskirts of their towns, or the particular parts of the towns they are hanging around in, while also paying attention to each of the dog’s sense of purpose in the town and which areas they are monitoring and lurking near. It seems as though this mirrors the way in which we create our own sense of belonging with place and create systems within our communities. As we decide who plays what role in our own social circles, Dion pays attention to each of the dog’s sense of purpose in the towns and creates a sense of agency and ownership amongst them.

As you leave the gallery, the final group of works shift the tone of the exhibition entirely. As you observe the actions of the dogs in these scenes, you see a wild nature to the dogs; a nature which is driven by instinct and hierarchy. You can sense this chaotic element of Dion’s dogs through not only their visual disposition, but also through the faces of his subjects. The dogs are now aggressive, with teeth bared. It is violent, intimidating, and territorial. Dion is speaking to the universal truth that we have seen across cultures time and time again: the fight for dominance and power.

At first impression, I must admit, I didn’t totally know how to respond to these works. However, after a few more visits and a deeper exploration of Dion’s history and context, I have since been able to unpack his work and place it within a wider cultural understanding. He has incorporated a pattern based on his perspective and understanding of the world, including the importance of Aboriginal storytelling. This creates a series of enjoyable pieces that speak strongly to their place and community. His drawings function as his own way of continuing and navigating the traditions of storytelling of those who came before him.

I, of course, come from a completely different background, but found there were still ways for me to connect to Dion’s work. I see Australia as a home, but, as someone who came from a migrant family, I don’t have a deep historical connection to the land in the way in which Dion might. I have some roots, in that Australia is a safe place for me, but I am also detached from them, in that I can feel the struggle between the language and culture from my Salvadorian history. I can empathise with Dion and his deafness and being non-verbal, as it relates strongly to the separation from language, or our cultural mother tongues in a way which I have personally experienced. As an writer, visual arts are a new language for me, and I suspect that Dion and many others use this medium to convey stories without having to juggle words and meanings in their heads. Dion’s artwork is a way to express what he sees around him, and a visual medium which speaks for him.