Here, there and back again: Landmark Exhibition Opens 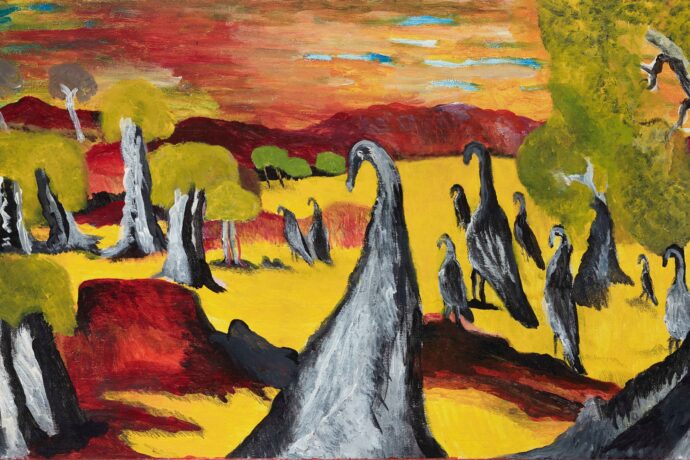 In partnership with Ellenbrook Arts, DADAA is delighted to present Here, there and back again – a survey exhibition of the life works of senior Noongar artist Desmond Woodley. The exhibition brings together a collection of works by a prolific artist whose depiction of country and beings are like no other.

Encompassing his lived experiences – from time at New Norcia Mission as a child, to working on cattle stations and travelling the vast state of Western Australia – Woodley’s works are powerful and haunting, conveying his perception of life and place.

DADAA has supported Woodley for more than a decade – originally as part of his health recovery but more recently to gradually extend a practice that places him back in Country. Ellenbrook Arts provided Woodley with his first exhibition opportunity back in 2007.

DADAA Executive Director David Doyle said that DADAA has invested heavily in its Aboriginal Arts program based at the organisation’s Midland location.

“Through DADAA’s programming and partnership approach, and with support from the Department of Local Government, Sport and Cultural Industries, Desmond is now able to present a significant body of work to a broad public audience.”

Executive Director of Ellenbrook Arts Gemma Ben-Ary said that Woodley’s career got its early start at the Ellenbrook Art gallery with the exhibition Coming Together curated by Lisa Wolfgramm in 2007, which eventually led to him becoming a well-loved, highly collected artist in Western Australia.

“Here, there and back again is a fitting way to present the past twelve years of Woodley’s practice, featuring collected artworks from many private collections, alongside new works,” she said.

”We are absolutely thrilled to have this exhibition here and look forward to sharing it with the community in Ellenbrook, and providing a rewarding experience for visitors coming from further afield.”

In working alongside Woodley over several months, Indigenous Curator Esther McDowell (Kickett) noted how subtly he tells his story, presenting a fresh and sure perspective of Bibulmun/Noongar country.

“Having been surrounded by Desmond’s work, I have begun to see Bibulmun/Noongar country differently thanks to Des’ art,” Ms McDowell said.

“His style is unique and stands with the dynamic practices of contemporary Aboriginal artists that have come to the forefront within Western Australia over the past ten years.”

Screenwest and the Metropolitan Redevelopment Authority have also supported Des’ work to be placed in Yagan Square – both as an animated showcase on the Digital Tower (to be launched as part of NAIDOC Week celebrations) and as a permanent mural in the Market Hall.