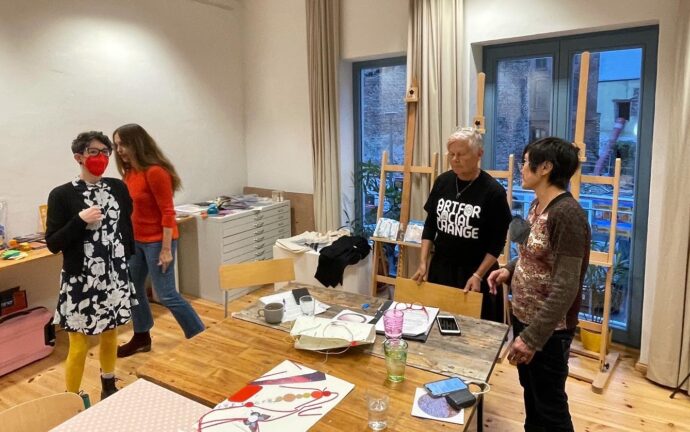 From Rottnest/Wadjemup to Berlin, Julie Barratt, Director of Arts Strategy, and Jacqueline Homer, Access Program Producer, have been on the road.

After working with the Wadjemup Museum on the exhibition Kwop Wirin, Julie and Jacqueline are currently in Berlin delivering workshops for German arts and disability organisation Berlinklusion at Brotfabrik, Berlin’s Inclusive Centre for Art and Thinking.

Berlinklusion is a Berlin-based network for accessibility in arts and culture and works to promote inclusion for artists and audiences with and without disability.

DADAA was invited to deliver a workshop for artists participating in Unbound, a flexible and accessible artist exchange and residency project managed by Berlinklusion. The workshops focus on the aesthetics of access and on the creation of artworks that are accessible for different audiences including people with sensory disabilities.

The residency program runs for 6 months with local artists, both with and without disability, culminating in an exhibition planned to coincide with the Berlin Special Olympics in June 2023.

DADAA will also present a community zoom workshop hosted by DADAA’s Executive Director David Doyle, as well as several peer to peer zoom sessions between the Berlin artists and artists in Japan which will culminate in a podcast series capturing artist case studies.

Some of the highlights so far:

The week began with their attendance at the No Limits Disability and Performing Arts Festival. This year marks the tenth time that the curtain will rise for professional dance, theatre and performance projects involving artists with a disability.

As Claudia Roth, Germany’s Minister of State said “culture by all and for all, should be more than just a slogan, it should be a principle for us to live by. The No Limits festival is a perfect example of this and I would like to see its influence extend well beyond Berlin”

Jacqui and Julie also visited a number of cultural institutions, galleries and artist run spaces and were especially impressed by the accessibility at the Jewish Museum in Berlin, with many exhibits using  Tactile models of paintings invite visitors to engage with the works by touch. Many stations use sound to convey their contents using sound domes, touching sound tubes or sitting in sound booths. A besamim vessel that you can hold in your hands and smell exudes the smell of spices traditionally used in the Havdalah ceremony that closes Shabbat.

Urban Nation, a museum for urban contemporary art, is a fantastic example of community arts and inclusion with projects promoting art, culture, and youth and elderly welfare. Its goal is to strengthen neighbourhood structures in order to promote social balance and integration in the sense of social development in Berlin. The current exhibition showcases the breadth and depth and cultural diversity of youth street art in Berlin. Jacqueline Homer and Julie Barratt also spent a day visiting the theatre company Kampnagel. Kampnagel is Germany’s biggest independent production venue for the performing arts and has been hosting and producing cultural activities since 1982. The site also hosts a number of festivals such as the International Summer festival.

They had a full tour of all 6 of the theatre spaces (the largest seats 850 people) by curator Alina Buchberger. “Artistic directors, theatre directors and choreographers are mostly non-disabled. Disabled artists projects are often initiated and perceived as ‘social projects’ which underlines their inferior position. We want to make a difference”

A collaborative space embedded in social inclusion and community cohesion, Kampnagel has worked in partnership with organisations worldwide including from South Africa and Australia.

Jacqueline and Julie spent time with the Artistic Director Amelie Deuflhard speaking about the ethos of Kampnagel as well as their programs. Artistic Director since 2007, Amelie Deuflhard has led Kampnagel on a journey examining how collaborations between artists with disability and without disability have created some of Europe’s most interesting and challenging works.

Jacqueline and Julie would like to thank the team at Kampnagel for being so generous with their time.