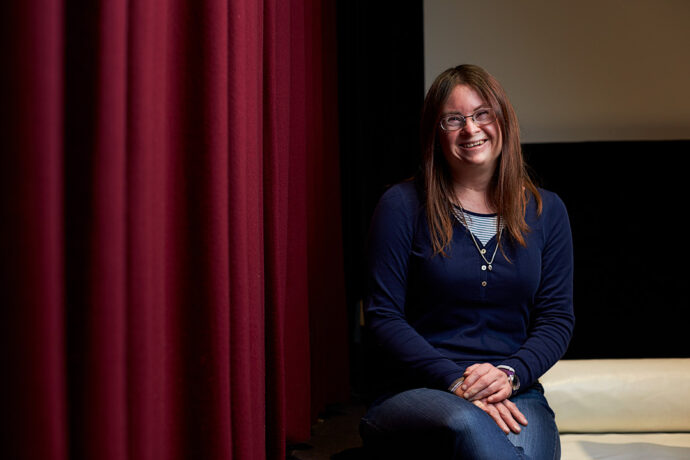 Artist Julia Hales has just finished her new film, FINDING LOVE. The 12-minute documentary weaves together responses from three fellow artists with disability on their experiences in relationships and thoughts about love. The natural openness and honesty of the film makes for compelling viewing, and captures the voices of people often not represented by mainstream media. FINDING LOVE also shows Julia’s enduring interest in human experiences of love, as well as just how at home she is in front of the camera.

The work was produced by Julia during her participation in DADAA’s Digital Dialogues project, in which she has participated since 2015. Film-maker Lincoln Mackinnon assisted her in the editing suite. A core part of stARTSPEAK, the Digital Dialogues project is a partnership between DADAA and Hydra Poesis. Based at the Centre for Interdisciplinary Arts in Leederville, Digital Dialogues has been funded by the Disability Services Commission and the Australia Council for the Arts to provide professional digital arts opportunities for 10 individual artists, one band and one dance company. Julia is one of these ten individual artists participating in the project.

Julia Hales began working with DADAA in 1997 on performance projects such as Lovebytes and Keep on Dancing Girl. In 1998 Julia was supported by DADAA to audition for the WA Academy of Performing Arts (WAAPA) one-year course and was accepted. Her work since then includes dance, theatre and screen. In 2014, Julia found herself back at WAAPA to complete a theatre and screen masterclass.

Julia’s latest news is her acceptance into the Arts Access Australia and Australia Council for the Arts’ Sync leadership program. The Sync Leadership Program will be presented by UK-based co-founders Jo Verrent, artist, Senior Producer with Unlimited and consultant with disability, and Sarah Pickthall, consultant, coach, community producer and diversity engineer.

Julia is a dedicated performer who creates works focused on universal desires of identity, fame and love. She is in constant pursuit of performance opportunities and skill development. She has co-devised her own work and performed at the State Theatre Centre of WA, the Blueroom, PICA and on ABC radio. This year she was cast as one of the traders in BLACKMARKET, Perth-based PVI’s performance work as part of PIAF 2016.

Julia is currently researching and developing a new theatre work based on her FINDING LOVE film – also through the Digital Dialogues project. You can watch FINDING LOVE on the link below.